skip to main | skip to sidebar

My blog has moved! I would love it if you would come visit me at my NEW blog home!

look who i got to play with today!

Isn't she just the CUTEST?
Those chub rolls are to DIE for.
I just LOVE chubby babies!
*sigh*
:) 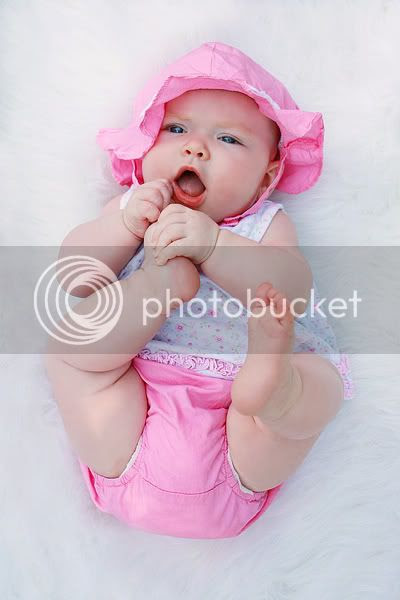 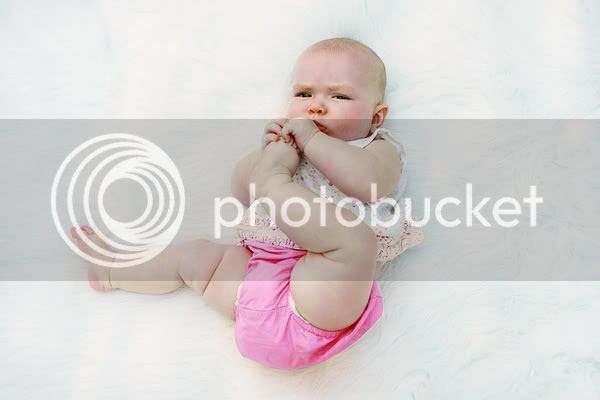 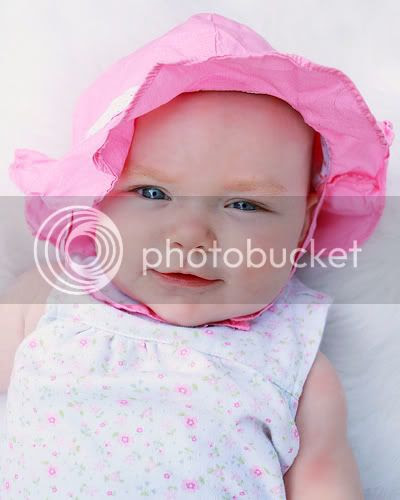 today was a good day.

It WAS a good day for the most part. Got my editing all done on the golf photos, just waiting on a couple of peoples' money so I can place the orders. The boys went golfing this afternoon, by themselves (which made me nervous but the guy at the pro shop assured me it was ok for them to golf without an adult). They did great- Austin golfed his best round ever (they only went 9 holes, since they had to walk the course- neither of them are old enough to drive a golf cart yet). They had fun and it was nice for them to go do something they both enjoy, and to GET ALONG while doing it!

Kaitlyn was in an awesome mood today too, full of it like usual but in a good way. I took advantage and got some great photos for her birthday invitation (can you believe she will be FOUR on Sept. 10?). I don't want to share the real photo I will be using on her invite just yet (I want it to be a surprise) but I can share this one that I took after I was done: 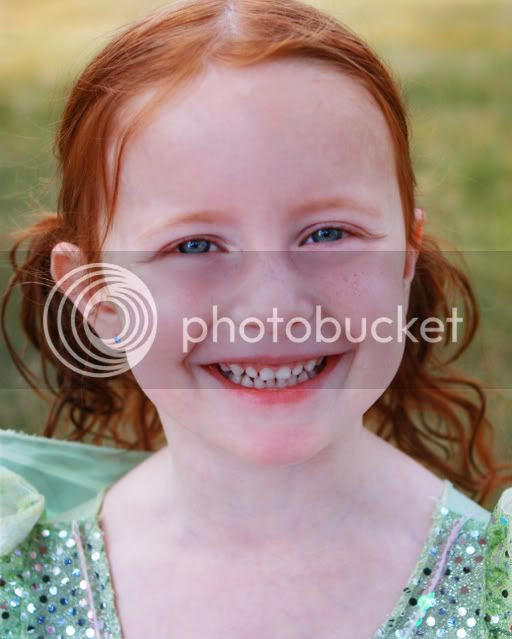 And this week's theme is sunflare! YAY! I've been meaning to practice more on learning to control flare and use it creatively I just haven't had the motivation so here it is! I snapped a couple real quick with my fisheye lens, I love how this lens gives me that "starburst" effect when I point it at the sun! 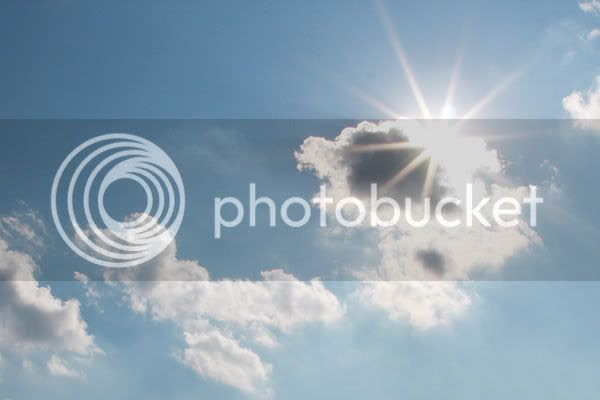 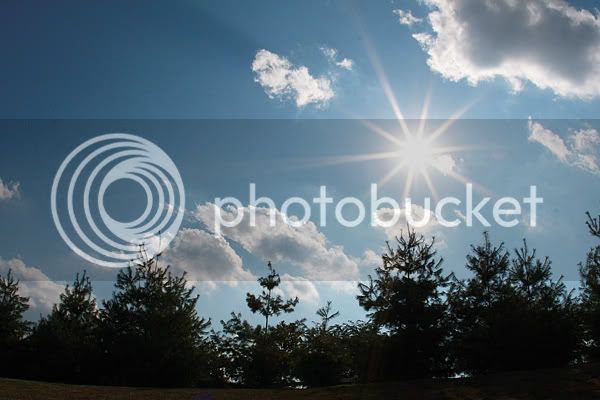 I dashed out into the living room and found this 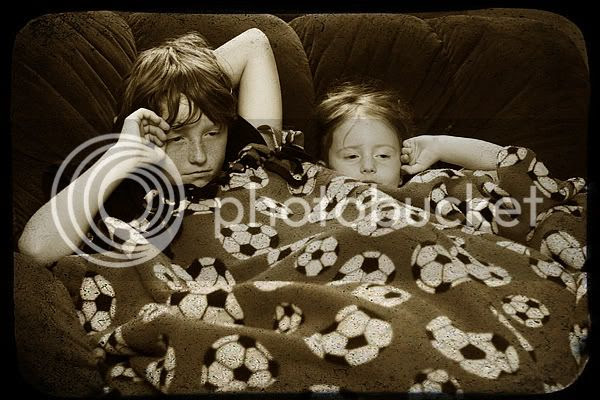 they were being GOOD.
Watching cartoons.
Devin even had a "mom approved" channel on-
Noggin-
instead of the mindless garbage cartoons he usually watches that he knows I hate.
I was speechless.
But I did manage to grab the camera for a quick shot before the moment passed.

The kids have actually been decently good today... I think they KNEW they were in for it after yesterday if they didn't CHILL. Good thing because I needed to take today to get my last minute things together/organized, camera cleaned, batteries charged, memory cards formatted, etc. for the golf tournament tomorrow.

So other than that one photo above that I snapped real quick this morning, I haven't taken anything new for the blog today. Sorry. :(

I did however, play around with a couple of shots from the other day when we went downtown. I almost trashed these but after reading some stuff on ttv processing (which is a method of making your photos look like they were taken through the viewfinder-ttv- of an old camera) I decided to play with them after all. There is a HUGE bank building downtown that has a crazy weird sculpture in front of it. I am not certain of what the sculpture is supposed to represent, if anything, but I have figured it out in my mind that since it has 3 "legs" the number 3 represents the holy trinity- the father, the son, and the holy spirit. I like that theory, and I'm sticking to it. :) 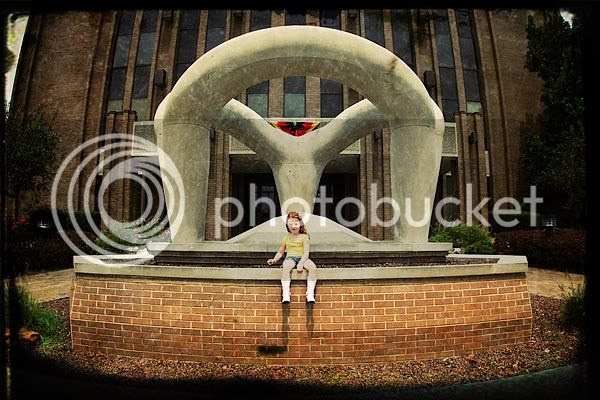 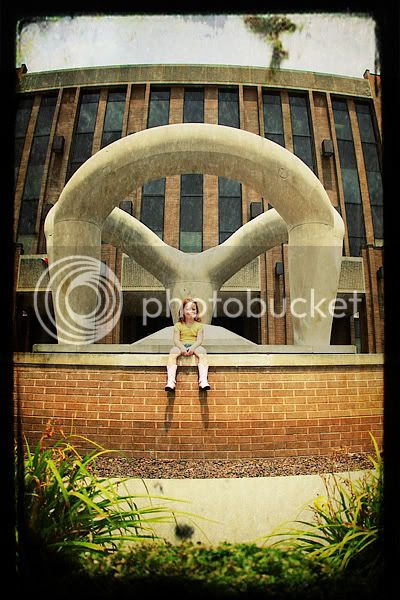 Now all the kids are outside riding bikes and screaming at each other... sigh... 2 weeks and 13 days till school starts...

Have a great weekend y'all, I probably won't be posting tomorrow since I'll be gone all day but I'll try to get something new for Monday!

how many days till school starts?

3 weeks and counting down! I cannot WAIT.
The kids are driving me absolutely UP. THE. WALL. today. Austin came home from visiting his Nana all week and I swear all h*ll broke loose! I won't go into details but let's just say all 3 have been banished to different rooms of the house for the rest of the evening. Sigh.

You can probably guess I didn't take any pictures today. Well, I take that back, I took ONE a little while ago. Kaitlyn found two bottles of nail polish- a pale shimmery pink and a dark purple (yikes). She wanted her toenails painted pink so I treated her, it's not very often she will sit still long enough for me to do girly things like that with her but she IS almost 4 (eek) so I'm sure she is growing into that stage. Anyway, once I finished her toes, she wanted her fingers done, then she wanted to paint MY toenails so I figured "what the heck, this will at least occupy her for two minutes". She definitely needs nail painting practice! But of course I gushed about how utterly FABULOUS my toes looked and how I can't WAIT for daddy to get home so I can show him.

A few minutes later I was checking my email when I heard a shriek from Austin- Kaitlyn had snuck off with the bottle of DARK PURPLE nail polish and started to paint HIS toenails under the table! He was TICKED at first but then we laughed about it... funny part is I don't have any polish remover at the moment so he is stuck with two purple toenails until it wears off! LOL!

So I made the two stick their feet by mine so I could snap a pic of our pretty toes... 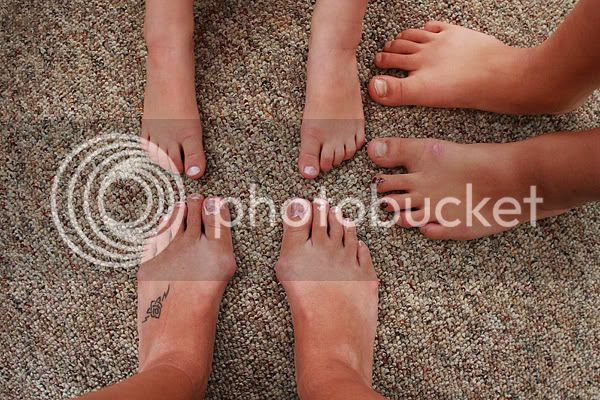 And then I played in photoshop and made a little collage of miss K from yesterday. I didn't post any of these pics, by themselves they aren't much but together they kind of tell a story. She had picked up a fallen blossom on the ground and was hugging it, kissing it, and snuggling with it. Don't know what exactly was UP with that but...?
What can I say, the girl LOVES flowers! 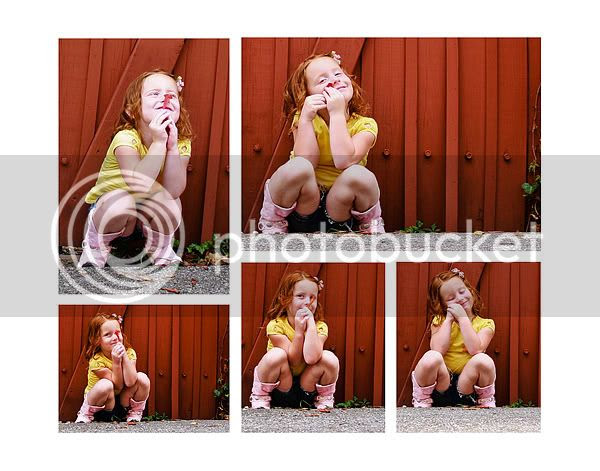 country girl in the city

Gotta love it when I ask the kids to go downtown for photos and this is what K picks to wear- cut off "daisy duke" shorts and pink cowboy boots!

I took Devin with me too, but he was less than cooperative. Probably because I kept getting after him for rolling way ahead of me on his Heelys. >eyeroll<

Oh well, I got some new favorite of princess K while we were out, so not a total loss!

I also took some inspiration from Celine (who is the proud new owner of her very own fisheye lens) and busted mine out to play- it's been a while! 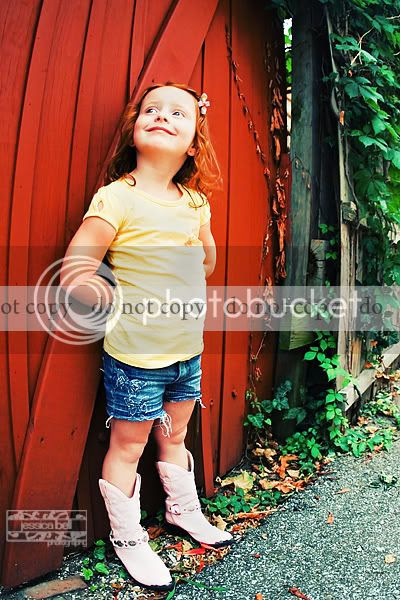 laughing because the wind was blowing her hair 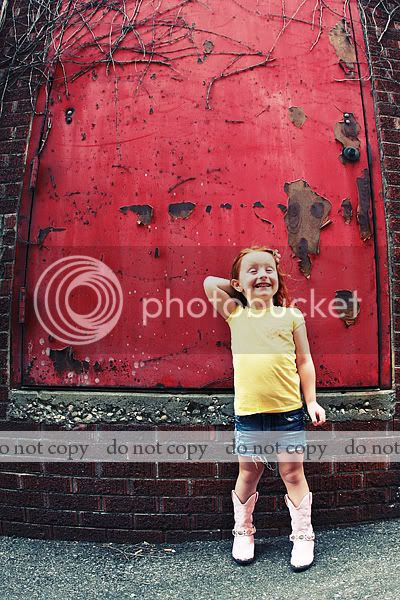 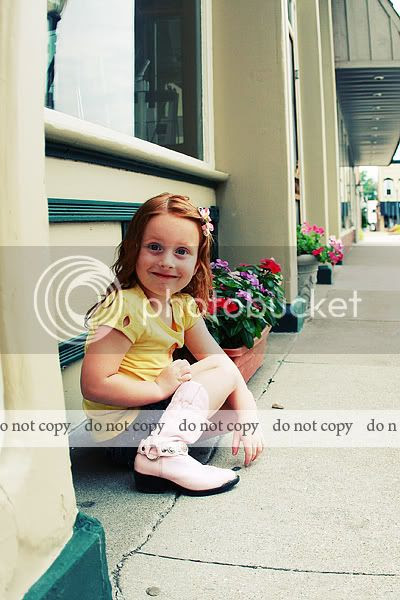 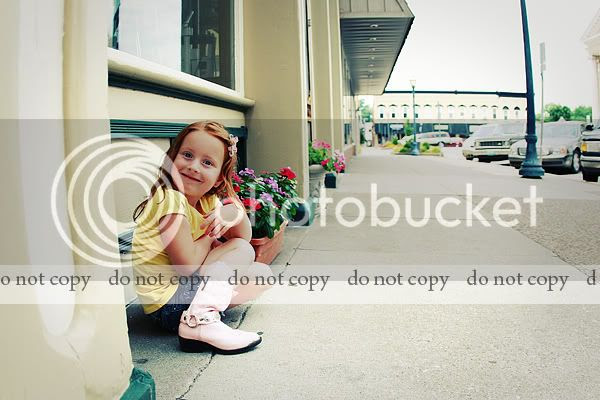 laughing at me for squatting so low I fell backwards onto my butt. Sigh. But I got the shot! 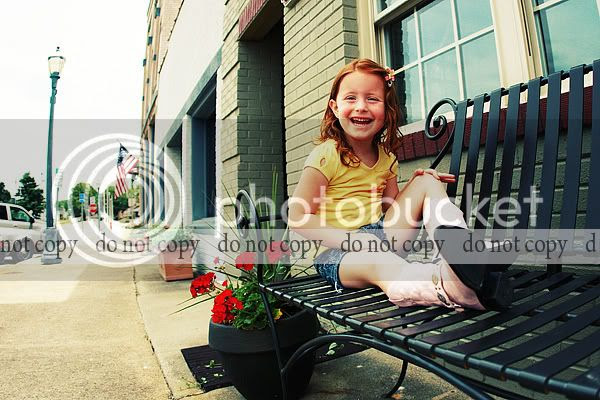 I will be honest. I am not a golfer, nor will I probably ever be. I had never even BEEN on a real golf course till a few weeks ago. But I can definitely see the appeal of being out there- it is so calm, quiet, and peaceful. Even if it IS just a bunch of guys (or gals) chasing a tiny white ball all over creation and trying to get the lowest score. (I mean really, WHO thought those rules up? LOL) 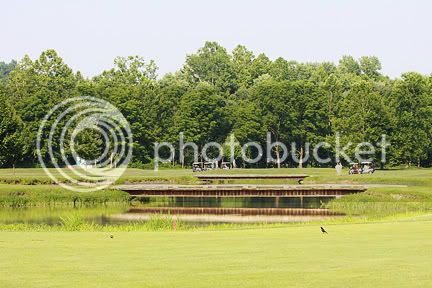 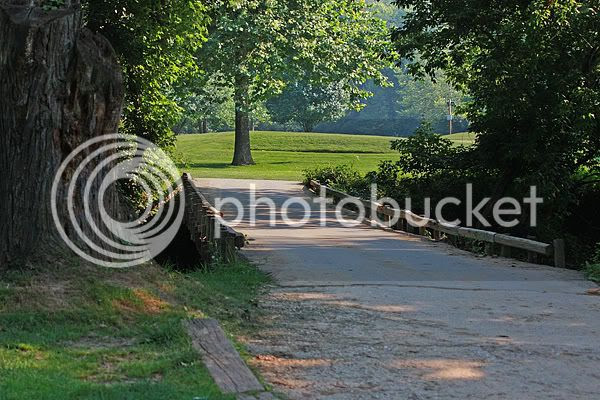 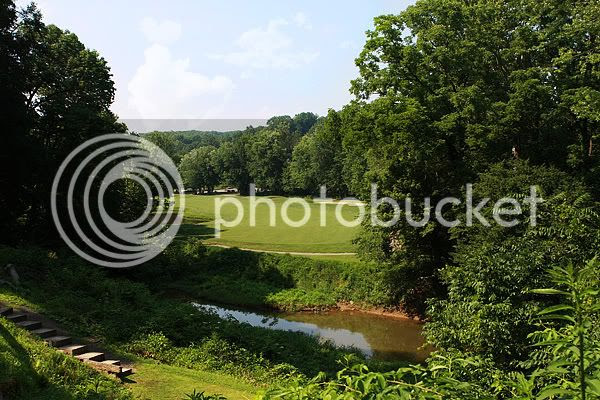 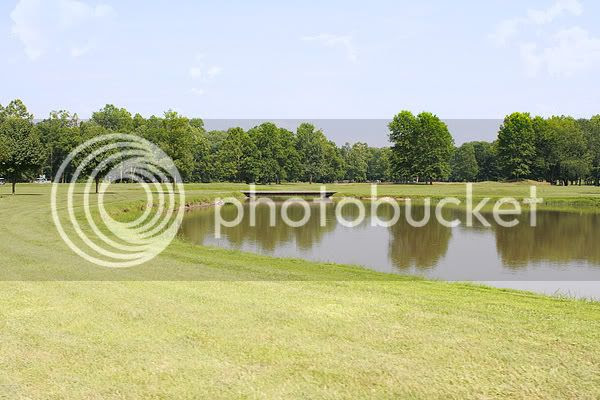 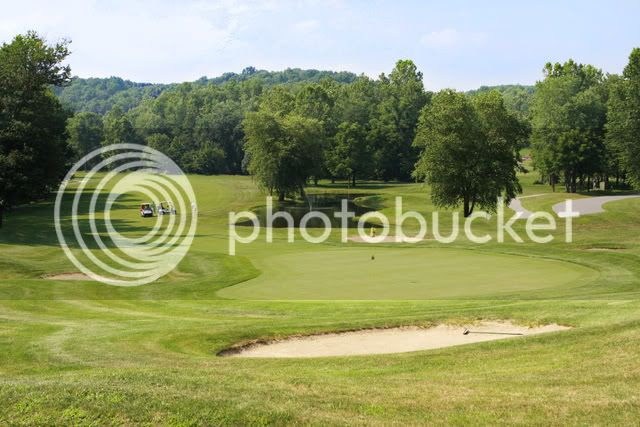 I couldn't resist this little gem when I was in the pro shop... I am so warped. 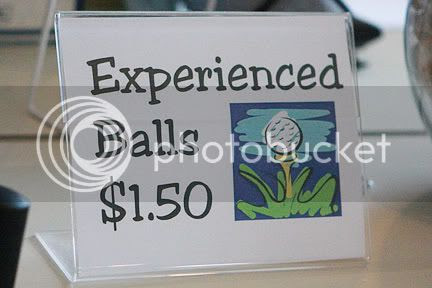 blogs that rock my face off!

All photos on this blog are © Jessica Bell Photography and are protected under U.S. copyright laws.

Please do not copy pictures from this blog without express written permission from me. Thank you!